Testing classes in isolation and with mocks is popular. But those tests have drawbacks like painful refactorings and the untested integration of the real objects. Fortunately, it’s easy to write integration tests that hit all layers. This way, we are finally testing the behavior instead of the implementation. This post covers concrete code snippets, performance tips and technologies like Spring, JUnit5, Testcontainers, MockWebServer, and AssertJ for easily writing integration tests. Let’s discover integration tests as the sweet spot of testing. 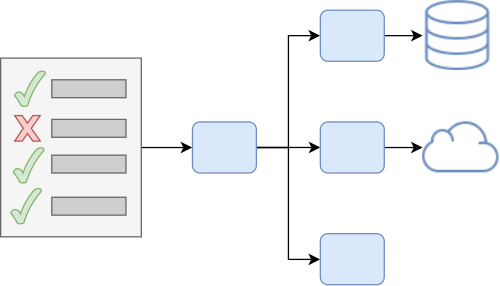 Let’s assume we like to write the HTTP resource /products. This resource retrieves the product data from a database, requests tax information from a remote service and executes some price calculation logic. Our class composition might look like this:

A typical solution for testing is to test every class in isolation. Many XUnit books are advising this:

“Test your classes in isolation and control its dependencies with mocks or stubs”.

So we end up with four tests:

What do we have here?

This approach is okay. However, it has some drawbacks:

What is the solution?

What have we achieved?

All in all, we are finally testing the behavior and not the implementation.

Let’s take a look at some code:

Complete source code of the ProductControllerITest

“Those integration tests take more time which slows down the feedback cycle.”

It doesn’t matter if you are wiring the real objects or mocks together. The execution time is as fast as with mocks - sometimes even faster because creating concrete objects is faster than creating mocks. However, there are two points that can take more time:

If you don’t like this automatism, you can also consider to introduce a system property for this.

“In integration tests, creating the input data objects and the expected output object for the assertions is laborious.”

That’s true, there is more data to set up and to check at the end, which can bloat the test code. But there are solutions for this:

“I just want to test if ProductDAO’s method findProducts() behaves as expected when I pass the crazy parameter combination XYZ to it. Writing an integration test would be an overkill. It’s so much easier to use unit tests for this.”

I can understand this argument and I’m not dogmatic about this point. But I always recommend trying to write integration tests also for corner cases; especially for corner cases.

“I can’t test feature X under Condition Y with an integration test.”

Again, most of the time, you don’t have to. What you actually should test is the behavior that follows a certain exception (no database updates, no subsequent calls to remote systems) and if an internal data structure leads to a certain output or effect.

You don’t have to. Libraries like MockWebServer and Testcontainers (via Troxiproxy) allows you to simulate slow networks or unavailable external systems. So you can safely use the real classes in the tests.

We Already Have VM-Based System Tests

“We still have to test if all real services are working together correctly. That’s we deploy all services of our system on a VM and run system tests again it.”

That’s great and those system tests are important. However, after my experiences, those tests tend to be fragile. Only a single mistake in one substream service or some wrong data can break your tests. Debugging can be a nightmare. Moreover, the effort for setting up this test environment is quite high. Plus, the feedback cycle is slow because you have to build and redeploy your service after a change.

The proposed integration tests are portable, fast, easy to set up and reliable. That’s a huge advantage, but the trade-off is that they don’t cover the whole system.

That’s not an “Integration Test”

There is no standard test taxonomy and therefore no common definition of the term “integration test”. I apply the term to the class level and test the integration of multiple classes. Some use the term for testing multiple deployment units in integration (which I would refer to as “system tests”). If you like to avoid this ambiguity, you can use the term “component test” for the proposed testing style.

Beside the classical HTTP endpoint integration test above, there are many other use cases.

Integration tests are even possible for UI tests. You can’t really test the layout and the concrete appearance in the browser, but you can test the business logic without much setup.

If you are using Vaadin, writing those tests is very simple, because Vaadin provides a Java-API for building your Web UIs which can also be using in the tests for assertions. Moreover, the library Karibu-Testing is very handy here.

Complete source code of the ProductViewITest

Let’s assume we like to test the behavior of a background job (for instance, a method that is annotated with Spring’s @Scheduled annotation).

The same approach can be applied here and the code looks pretty much like the ProductControllerITest.

The complete source can be found on GitHub in the project modern-integration-testing.