Unit Testing in Kotlin is fun and tricky at the same time. We can benefit a lot from Kotlin’s powerful language features to write readable and concise unit tests. But in order to write idiomatic Kotlin test code in the first place, there is a certain test setup required. This post contains best practices and guidelines to write unit test code in Kotlin that is idiomatic, readable, concise and produces reasonable failure messages. 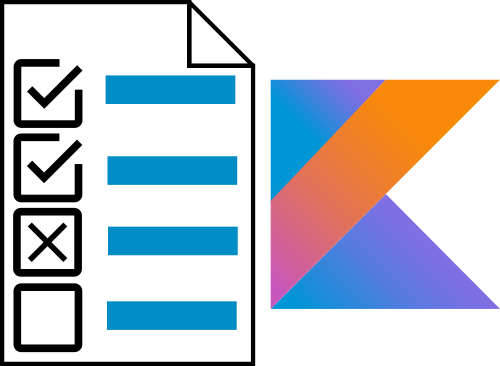 I offer a hands-on workshop about testing in Kotlin. It covers the full range of testing: mock-based unit tests, integration tests, property-based tests, and data-driven tests. In the end, you will be able to write clean and idiomatic tests and apply battle-proven best practices. Check out the details.

Recording of the KotlinConf Talk

At the KotlinConf 2018, I held a talk about this topic. You can watch the video here. Please note that the blog post below is more up to date than the recording. For instance, I now recommend the Kotest matchers instead of AssertJ.

Most of the best practices for unit testing in Java are still valid because they are language-agnostic.

Recap: What is Idiomatic Kotlin Code?

But how can we transfer these best practices to our test code?

In JUnit4, a new instance of the test class is created for every test method. So the initial setup code (that is used by all test methods) must be static. Otherwise, the setup code would be re-executed again and again for each test method. In JUnit4, the solution is to make those members static. That’s ok for Java as it has a static keyword. Kotlin doesn’t have this direct mean - for good reasons because static access is an anti-pattern in general.

First, this approach is more concise, because we don’t have to wrap everything into a companion object containing @JvmStatic annotated fields. Second, it’s idiomatic Kotlin code as we are using immutable non-nullable val references and can get rid of the nasty lateinit. Please note, that Kotlin’s apply() is really handy here. It allows object initialization and configuration without a constructor. But using a constructor or an initializer block (init { }) is sometimes more appropriate if the initialization code is getting more complex.

In fact, we don’t need JUnit5’s @BeforeAll (the equivalent of JUnit4’s @BeforeClass) anymore because we can utilize the means of object-oriented programming to initialize the test fixtures.

Side note: For me, the re-creation of a test class for each test method was a questionable approach anyway. It should avoid dependencies and side-effects between test methods. But it’s not a big deal to ensure independent test methods if the developer pays attention. For instance, we should not forget to reset or reinitialize fields in a @BeforeEach block and don’t (re-)assigned fields in general - which is not possible when we use val fields. ;-)

Change the Lifecycle Default for Every Test Class

Writing @TestInstance(TestInstance.Lifecycle.PER_CLASS) on every test class explicitly is cumbersome and easy to forget. Fortunately, we can set the default lifecycle for the whole project by creating the file src/test/resources/junit-platform.properties with the content:

Use Backticks and @Nested Inner Classes

Due to the variety of available Kotlin test libraries we are spoilt for choice. Here is an incomplete overview of some Kotlin-native and Java libraries for testing, mocking and assertions (note that some libraries fit into multiple categories):

For me, it’s a matter of taste. Check them out and make up your own mind. We ended up using plain JUnit5, MockK, and Kotest’s matchers.

For a long time, we still used the powerful AssertJ in our Kotlin projects and it’s still a good choice. But we moved to Kotest’s matchers. Kotest has the advantage of being written in Kotlin. So it can leverage Kotlin’s language features which allows you to write more idiomatic and concise assertions.

But Kotest is not only an assertion library; it’s a whole test framework. However, I still prefer JUnit5 (for now) due to its simplicity and the better tooling in the IDE. Fortunately, you can use Kotest’s matchers in isolation as they are located in a dedicated dependency.

Classes and therefore methods are final by default in Kotlin. Unfortunately, some libraries like Mockito are relying on subclassing which fails in these cases. What are the solutions to this?

I highly recommend using MockK. First, you don’t have to worry any longer about final classes or additional interfaces. Second, MockK provides a convenient and idiomatic API for writing mocks and verifications.

Note the usage of lambdas in verifySequence { } to nicely group verifications. Moreover, MockK provides reasonable error messages containing all tracked calls if verification fails. I also like that MockK fails with an exception if an unspecified method is called on a mock (strict mocking by default). So you don’t run into mysterious NullPointerExceptions known from Mockito.

Besides, MockK’s relaxed mocks are useful if the class under test uses a certain object, but you don’t want to define the behavior of this mock because it’s not relevant for the test. A relaxed mock returns dummy objects containing empty values.

But mind, that relaxed mocks can also lead to tricky errors, when you forget to mock a required method. I recommend using strict mocks by default and relaxed ones only if you really need it.

Recreating mocks before every test is slow and requires the usage of lateinit var. So the variable can be reassigned which can harm the independence of each test.

Instead, create the mock instance once and reset them before or after each test. It’s significantly faster (2 s vs 250 ms in the example) and allows using immutable fields with val.

The presented create-once-approach for the test fixture and the classes under test only works if they don’t have any state or can be reset easily (like mocks). In other cases, re-creation before each test is inevitable.

If possible don’t compare each property for your object with a dedicated assertion. This bloats your code and - even more important - leads to an unclear failure message.

This leads to poor failure messages:

Expected: 2. Actual: 1? What is the semantics of the numbers? Design id or User id? What is the context/the containing class? Hard to say.

Instead, create an instance of the data classes with the expected values and use it directly in a single equality assertion.

This way, we get a nice and descriptive failure message:

We take advantage of Kotlin’s data classes. They implement equals() and toString() out of the box. So the equals check works and we get a really nice failure message. Plus, Kotest detects data classes and outputs the property that is different. Moreover, by using named arguments, the code for creating the expected object becomes very readable.

We can take this approach even further and apply it to lists. Here, Kotest’s powerful list assertions are shining.

How cool is that?

If you really want to assert only a few properties of a data class, consider grouping the assertions using Kotest’s asClue{} function. First, it nicely groups the code. Second, failure messages will also print the object that asClue was invoked on. That provides very useful context.

Data classes can also be used for parameterized tests. Due to the automatic toString() implementation, we get a readable test result output in IDEA and the build.

Use Helper Functions with Default Arguments to Ease Object Creation

In reality, data structures are complex and nested. Creating those objects again and again in the tests can be cumbersome. In those cases, it’s handy to write a utility function that simplifies the creation of the data objects. Kotlin’s default arguments are really nice here as they allow every test to set only the relevant properties and don’t have to care about the remaining ones.

This leads to concise and readable object creation code.

I prefer to use fixed values instead of randomized or changing values. But writing code like Instant.ofEpochSecond(1525420010L) again and again is annoying and blows the code.

Fortunately, we can write extension functions for frequently used objects like Instant, UUID or MongoDB’s ObjectId.

The code will become concise while keeping the different values visible:

The failure messages can be easily traced back to the test code:

Extension Functions can be useful to extend an existing library in a natural way. Here is an example: Kotest’s plusOrMinus() for floating comparison requires a tolerance parameter. This leads to a lot of code duplication, bloated code, and distraction while reading the tests.

Instead, define the extension function shouldBeCloseTo() on Float which delegates to a plusOrMinus() invocation with a fixed tolerance. This method is specific for the current test class and can be placed there.

The essential test logic becomes clearer and the code is still idiomatic as we stick to the pattern of Kotest.

The same technique can be used for all libraries with a fluent API.

Testcontainers is a Java API to control containers within your test code. That’s great for executing your tests against a real database instead of an in-memory database. I highly recommend this approach. However, starting a new container for each test is usually a big waste of time. It’s better to create the container once and reuse it for every test. Kotlin’s object singletons and lazy initialized properties (by lazy { }) are very helpful here.

I offer a hands-on workshop about testing in Kotlin. It covers the full range of testing: mock-based unit tests, integration tests, property-based tests, and data-driven tests. In the end, you will be able to write clean and idiomatic tests and apply battle-proven best practices. Check out the details.