In the last post, I presented the Timestamp_Offset_Checkum continuation token for implementing web API pagination. After using them in practice for a while we discovered some drawbacks and finally came up with a new approach: Timestamp_ID. This approach is fast, scalable, efficient, stateless and easy to implement. Our pursuit of the best pagination strategy has finally come to an end. 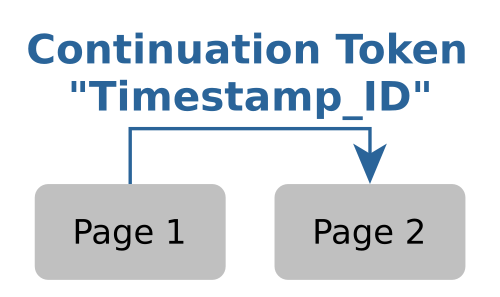 Let’s start with a recap of some web API pagination approaches.

The token has the format Timestamp_ID and contains only two parts:

The implementation boils down to a simple but smart SQL WHERE clause:

That’s it. No fancy algorithm that has to be applied in addition to this query. Let’s consider some cases to see this approach in action.

If all elements have different timestamps and the token is 30_3, searching for all elements with timestamp > 30 cuts it. We correctly continue with element 4.

The second clause get even more relevant if all elements have the same timestamp (like 10). No element is missed.

Let’s assume that the timestamp of an element (like the date of the last modification) is updated (i.e. set to a higher value) during two page requests. Take a look at element 3 with the timestamp 20. Its timestamp is set to 99 after page 1 is delivered. So it moves to the very end of the element sequence. Hence, it’s delivered twice to the client - or even multiple times. The client has to deal with it. But the most important point here is that we won’t miss any element (like element 4).

What about AND timestampColumn < now()?

We haven’t mentioned the additional condition AND timestampColumn < now() yet. To illustrate its relevance, let’s assume that it would not be there. Then, assume the following actions are happening within the same timestamp (e.g. 99):

In this cases, the next request with the token 99_3 would not return the element 2. So we may miss elements when we are requesting the last page and changes are happening at exactly the same timestamp. Is that likely? Well, it depends on the precision of our timestamps. It’s highly recommended to use millisecond precision which makes those situations unlikely (but not impossible). But especially when it comes to legacy applications and schemas we may face second precision. Probably, we’ll miss elements.

Independent of the precision, we can fix that problem by adding AND timestampColumn < now() to the SQL query. This way, we don’t deliver the element 3 anymore (because now() returns 99). So the continuation token becomes 20_2 (instead of 99_3). Hence, the next request (usually in the next pagination run) will correctly return both updated elements 2 and 3.

Some final thoughts and implications:

The implementation is really simple. Nevertheless, I created a small example service with Kotlin, HTTP4K and a MySQL-flavoured H2 database. Check out my GitHub repository ti-continuation-token. Especially, the DAO and the classes in the token folder are relevant.