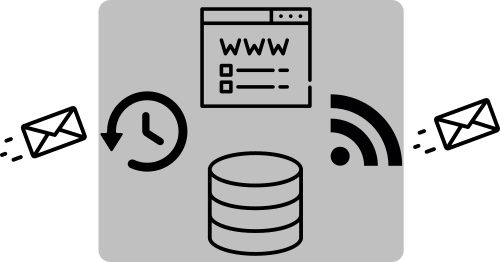 The term “microservices” is not officially defined. One pretty wide definition is:

Microservices is a modularization approach aiming at independently deployable units.

Self-Contained Systems (SCS) answers those questions. They define a set of characteristics leading to an autonomous and loosely coupled application. It’s independent in terms of development, deployment, scalability and in case of outages of other services. Some characteristics are:

Architecture and Technologies of our Self-Contained System

Our Self-Contained System is called “Neptune” and is used for design management and enrichment. The important point is, that Neptune is an internal application. So scalability and throughput are not that important.

Let’s see how we applied the SCS constraints to Neptune. Here’s the big picture:

We put every functionality into a single deployment unit: the UI, the database access layer, the client for fetching the master data and our feed. There is no further distribution within our self-contained system.

So we get some of the advantages which we know from monoliths. And this is really great! But a self-contained system is not a monolith. An SCS has a focused domain and purpose. It contains only those workflows and domain entities that are required in order to fulfil this goal. The purpose of Neptune is design management and enrichment. Thus we only care for (some) design data and provide a UI only for dealing with designs. In Domain Driven Design, we would call it a bounded context.

In an SCS, the UI should be part of the same deployment unit as the business logic. This ensures an easy deployment (no coordination required) and centralizes the domain logic in one component, which in turn simplifies changes.

The concrete UI technologies are not restricted by SCS. Some options are:

We decided to go for Vaadin due to the following reasons:

But Vaadin is no silver bullet. If high scalability, SEO or fine-grained and direct control over the DOM would have been our first class citizens, we wouldn’t have chosen Vaadin. But as Neptune is an internal application, Vaadin is the right tool for this job.

If you like to read more about Vaadin, check out my Vaadin Evaluation.

Events via HTTP Feeds and Polling

We decided to implement our events as HTTP feeds which are polled regularly. So Neptune polls a feed on another service to retrieve new design master data. If a user marks and labels a design, the created enrichment data is also exposed via a feed by Neptune and offered to interested services. This way, we asynchronously synchronize the data in our platform.

Implementing events with an HTTP feed and clients is more laborious than using a messaging broker like Kafka or ActiveMQ. You have to take more effort into implementing it properly and in a reliable way especially in case of errors. Moreover, the inconsistency gap when polling is usually bigger. But the advantages are that you don’t need any shared infrastructure (like the messaging broker) anymore and you can implement certain configuration (poll frequency, time that an event is kept, reading the complete history) right into the components and control it that way. Also, evolving the payload format and URLs is more easy with the means of HTTP and Hypermedia (see Ensure Evolvability of the API).

We didn’t use standards like Atom for our HTTP Feed. Instead, we used a custom JSON API, which is slightly inspired by json:api. A real challenge was to implement a fast, stateless, reliable and efficient pagination approach. It took us multiple iterations until we ended up with the Timestamp_ID continuation token. Check out my dedicated blog post about this topic.

An own database has the following advantages:

Neptune and each service within its boundaries are owned by different teams. In order to reduce the coordination and communication effort between the team, it’s good to technically decouple the components as far as possible. We did this by communicating only asynchronously via events and following the “share-nothing” approach (no shared database, broker or libraries). All in all, the development of Neptune is independent. Business requirements can usually be implemented without other teams and by touching only Neptune.

As always, there is no rule without an exception. Neptune retrieves also data from another service, but this data is small and changes extremely rarely. So we decided to retrieve them synchronously but keep the data in a Caffeine cache. The coolest thing is the refreshAfterWrite() configuration. If the cache is expired, the cache doesn’t block but returns the expired value. But in the background, it tries to update the cache by calling the service again. If this fails, the old value remains. So we may become outdated, but are still available and responsible. Additionally, to avoid delays for the user, we warm up the cache during the startup of Neptune. This way, we are also resilient against outages of the service while keeping the implementation really simple (no own persistence, no logic for data replication and updating).

What I like about Self-Contained System is the fact that they are resilient by design. You don’t have to throw resilience technology at a distributed system in order to make it resilient. In cases of too many synchronous (blocking) calls, people tend to utilize Netflix Hystrix, Spring Cloud or reactive programming. Don’t get me wrong, these technologies are great and can be very beneficial. But in some situations, the lack of resilience could have been avoided in the first place by an architecture that uses an own database and communicates asynchronously via events.

Did We Plan to Build an SCS?

Honestly, we didn’t set out to build a “Self-Contained System”. It just happened. We were thinking about a good architecture that leads independence in many ways. And we finally came up with this architecture. Afterward, I heard about Self-Contained Systems and listened to Oliver Gierke’s talk “Refactoring to a System of Systems” and realized: “That is exactly what we did with Neptune”. But I suppose I’ve been confirmation-biased. ;-)