Extracting common code to a library seems to be developer’s best practice. Reuse boosts the development, doesn’t it? However, in a microservice architecture shared libraries tightly couples microservices together. You lose a huge benefit of microservices: independence. In this post I like to point out why shared libraries are not a good idea and present alternatives. 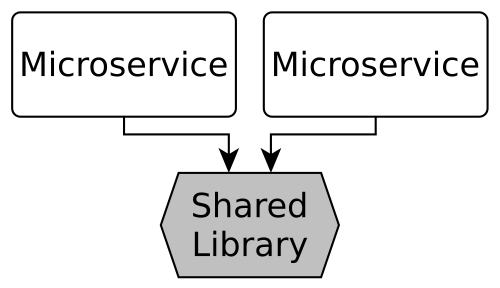 In short-term a reusable library speeds up the development, but it leads to coupling between the microservices. Consequently in long-term it slows down the development, increases the coordination effort and hinders modernization. The microservices are not independent any longer. Especially don’t use shared libraries for business logic and models. Instead, accept redundancy, introduce a shared service or reslice your microservices.

Mental Barrier to Refactoring and Modernization

Don’t get me wrong. I’m not dogmatic. Spring, Apache, Lombok, Guava - There is no doubt that open-source libraries are of great value. Modern software development is not possible without them. Usually, open-source libraries have a high level of quality, contain less bugs and are on a level of abstraction that make it reusable for all of us. This is a great difference to in-house-hacked libraries. That’s at least my experience.

It’s okay to have libraries for technical concerns (e.g. for logging or monitoring), because it’s not likely for a business requirement to affect these concerns. But never move business and domain logic to libraries, because this will lead to frequently updates and deployments of all microservices. For instance, if the domain model classes are placed in a library and a new business requirement demands a change in this model we have to update all microservices using this model. Besides, in a microservice architecture, every microservice should be a bounded context anyway (see domain-driven design). Therefore, a microservice should have its own domain model. So there should be no reason for another microservice to use exactly the same domain classes.

Moreover, sharing libraries can also be acceptable, when all microservices utilizing the library are maintained by the same team. This way, the changes only have to be coordinated within one team. And the impact to other microservices can be better assessed, because the team knows a lot about the affected microservices.

Microservices should follow the “shared nothing approach”. This way, we avoid technical and organizational coupling, speed up the development and enable modernization.