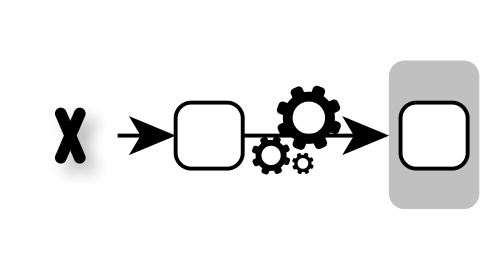 Following the “old-school” release approach means to ship a release after a certain amount of time (let’s say 6 months). We have to package the release, test it, set up or update the necessary infrastructure and finally deploy it on the server.

What are the problems about this approach?

“If it hurts do it more often and bring the pain forward.”
A Practical Guide to Continuous Delivery

We reduce the pain of releasing by releasing more often. Therefore, we have to automate the whole release process (including package release, set up/update infrastructure, deploy, final tests) and eliminate all manual steps. This way we can increase the release frequency.

What are the benefits of this approach?

All in all, Continuous Delivery is about

Setting up a Simple Continuous Delivery Pipeline with Docker

Please mind that some information in this post are a little bit dated. Some points:

I used Ubuntu 14.04 LTS and Docker 1.8.2 for this tutorial. I highly recommend to use a Linux distribution in order to run Docker natively. Sure, you can try docker-toolbox/boot2docker for Windows and Mac OS X. But I wasn´t happy with this tool and the additional VM layer in daily use.

You can find all sources I used for this tutorial on my Github repository.

The Example Application and the Advantage of Using Runnable Fat Jars

Our example application “hello-world-app” is a simple RESTful microservice created with Dropwizard. Dropwizard let us create a runnable fat jar which already includes an embedded jetty. So we only need to execute the jar in order to start our microservice. This simplifies the necessary infrastructure (no servlet container has to be installed in advance; no deployment of the war into the servlet container) and the deployment process (just copy the jar and execute it). Consequently the architectural decision to use runnable fat jars significantly eases the setup of a Continuous Delivery pipeline.

We will need the following projects:

During this tutorial we will set up

We won’t clutter up our local machine by installing these components directly. Instead, we start them as Docker containers. This way, we can easily clean up once we are done. We see that besides using Docker to ship our application itself, it is also a great tool to create infrastructure for build and development.

Please note, that this tutorial is a simplified demonstration of a Continuous Delivery pipeline. It’s just a technical spike. Some important issues (databases, blue/green deployment, canary releasing, security, encryption, IP handling, distribution, communication between the containers, multiple Jenkins nodes) are poorly realized or not covered at all. But consider this spike as a starting point for your own pipeline.

First of all, you need the IP of your host machine (like 192.168.35.217). Therefore, run ip route to get the IP of the host machine. Look for the IP after the “src” keyword. You can test the IP by trying to ping the IP within a container by running docker exec -it bash (getting bash inside the container) and then ping <IpOfHostMachine>

Check out my Github repository using

Wait for startup. Create and configure our Git projects:

Next we commit the projects to our Git repository.

Next we launch the Docker Registry.

You can see the saved images in the registry by calling http://localhost:5000/v2/_catalog .

Configure the Docker daemon to use an unsecure connection for accessing our local Docker Registry. Therefore, add –insecure-registry <IpOfHostMachine>:5000 to the DOCKER_OPS variable in /etc/default/docker.

Now we are ready to start our Continuous Delivery (!) server Jenkins: :-)

Finally, we want to run our built and tested docker image.

Voila, that’s it! We successfully set up a simple Continuous Delivery pipeline. Every time we push a change to our hello-world-app Git project, the application goes through the whole pipeline and is finally deployed in “production”. This way we get feedback quickly, increase the reliability of our delivery process and reduce the risk of releasing (due to automation).