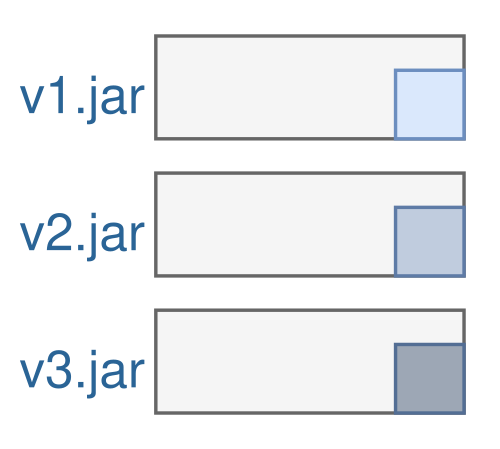 The Problem: The Dependencies in the Fat Jar

The layer mechanism of Docker is powerful. If all of your applications are using the same base image (like openjdk:11.0.4-jre-slim) Docker reuses the layers of the OS and the JRE. So we save storage in the Docker registry and speed up the upload to and download from the registry because fewer MBs have to be transferred (Docker only transfers the layers that are new to the registry).

Unfortunately, many applications don’t fully leverage this powerful mechanism because they are using fat jars within a Docker container.

Let’s assume our Spring Boot application is packaged into a fat jar. This fat jar is 72 MB big and is added in the last line of the Dockerfile. This means that each new release will take 72 MB storage and 72 MB have to be uploaded to and downloaded from the registry.

Now, it’s important to take a closer look at these 72 MB:

So the code that is usually changed for a new release is only a few MB. Still, we copy all the dependencies and resources again and again in each artifact. That’s a waste of space, bandwidth and time.

Moreover, the space wasting is getting even worse when you are creating a unique, deployable artifact for each commit (using the git commit hash as the version number of the artifact). That makes sense for continuous delivery but leads to a high storage consumption as every commit occupies additional 72 MB.

What are useful tools for analyzing docker images and visualizing the impact of fat jars in docker images? It’s dive and docker history.

The Solution: Different Layers for Dependencies, Resources, and Code

Fortunately, we can take advantage of Docker’s layering mechanism; just like we already do for the OS and the JRE layer. We extend this approach by introducing different layers for the dependencies, the resources, and the code. And we order the layers by the frequency of change.

Now, if we create a release that only consists of code changes, we only require 2 MB of storage because the layers for the resources and dependencies can be reused. They already exist in the registry and don’t have to be transferred to it again.

Good news: We don’t have to manually write Dockerfiles for our Java applications. We can use Google’s Jib. Jib is available as a plugin for Maven and Gradle and it simplifies the containerization of Java applications. A nice pitch for Jib can be found in the Google Blog, but one characteristic is most important for us: Jib scans our Java project and creates different layers for the dependencies, resources and the code. It’s great how Jib works out of the box.

What are the steps?

Clean-up 1) Disable the maven-deploy-plugin, the maven-install-plugin, and the maven-jar-plugin. These steps are not required anymore and should not be executed even if the developer types mvn deploy out of habit.

Clean-up 2) Remove the spring-boot-maven-plugin if you are using Spring Boot. There is no need to create a fat jar anymore.

Jib allows configuring the JVM flags and program arguments in the pom.xml. But usually, we don’t want to set those things at the build time. Instead, the configuration depends on the deployment environment (local, QA, production). This is where we want to set the Spring configuration and the JVM Heap size.