A popular approach is packaging by technical concerns. But this approach has some drawbacks. Instead, we can package by feature and create self-contained and independent packages. The result is a codebase that is easier to understand and less error-prone. 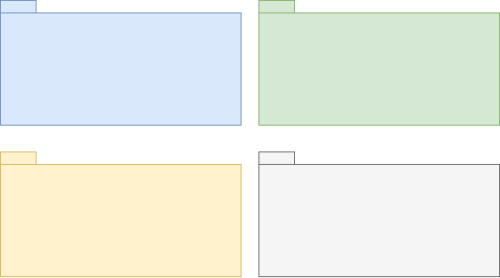 A very popular approach for a project structure is to package by layer. This leads to a package for each technical group of classes.

Let’s add the call hierarchy to the picture to “clearly” see which class depends on which class.

So, what are the drawbacks of packaging by layer?

“I felt like I had to understand everything in order to help with anything.” Sandi Metz. See my post about our Wall of Coding Wisdom.

We achieve DRY but violate KISS.

The new package userManagement contains all classes that belong to this feature: the controller, the DAO, the DTOs and the entities.

The new package productManagement contains the same class types plus the StockServiceClient and the corresponding StockDTO. This fact states clearly: The stock service is only used by product management.

Now, it’s getting interesting. The package exportProduct also deals with the product entity but has a different use case.

We may have to write more code (again) but end up with a very beneficial situation:

The above feature packages are great but in reality, we will always need a common package.

Let’s briefly wrap up the benefits:

However, I believe that the advantages outweigh the drawbacks.

The proposed package-by-feature approach follows a principle that’s very close to my heart:

A Recipe to Package by Feature

Our team documents its coding guidelines and principles that it commits on. The section about packaging by feature looks like this:

What About the Structure Within a Feature Package?

This depends on the size of your project and feature packages.

For small and mid-size projects, I like to avoid defining rules that may add more ceremony than value (e.g. by requiring certain interfaces and subpackages). As long as you build independent and self-contained packages derived from your domain you are on the right track.

If you are dealing with a bigger codebase you may want to define more rules about the subpackage structure and the way, one feature package is allowed to access another one. The notion of “modules” or “components” instead of “feature packages” may be more helpful. For example, Tom Hombergs suggests adding api and internal packages in each component package that defines which parts of the component are allowed to be used by other components. See his post “Clean Architecture Boundaries with Spring Boot and ArchUnit” for details.

Will I End Up Writing the Same Code Again and Again?

Yes, there will be some duplication but after my experience, there is not so much 100% identical code as you may believe. As the similar code covers different use-cases it is often different. For instance, two methods may query for products by the product name but they differ in the projected fields, sorting and additional criteria. So it’s totally fine to keep the methods separated in different packages.

Moreover, duplication is not evil per se. I like to apply the rule of three before I start to extract code to a generic reused methods.

Finally, I like to highlight that centralizing reusable code is still allowed and sometimes reasonable, BUT those cases are not so frequent anymore.

Can Kotlin Support This Approach?

The packaging approach is language-independent. But Kotlin makes it easier to follow it:

I am Philipp Hauer and I work remotely as a Head of Engineering for Commercetools in Leipzig, Germany. I strive for building happy, motivated, and productive teams and I’m enthusiastic about Kotlin, clean code, distributed systems, testing and the sociology of software development. I’m tweeting under @philipp_hauer, giving talks and offering consulting and workshops.