Traditional hierarchy-based feedback flows are limited as they don’t consider the useful feedback of peers. To improve this, I suggest a “Complete Peer Feedback” session: All team members come together and share their appreciation and growth potential for their peers. In this post, I present our experiences with this approach, why we are enthusiastic about it and how you can adopt it. 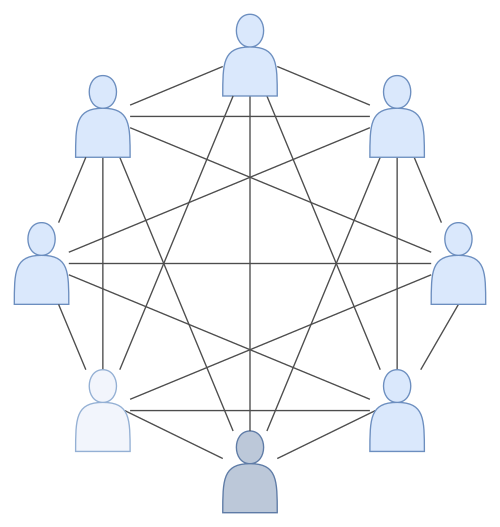 Unfortunately, in many organizations, feedback is only given along the hierarchies. In staff appraisals, the team manager talks to the team member and both exchange feedback. What’s wrong with this approach?

So let’s forget hierarchies and try something better. We call our approach “Complete Peer Feedback”: First, we let the whole team come together in a cozy and open atmosphere. Therefore, having a circle of chairs is a good idea. Second, we stick to the following process: You start with one team member. Now, each remaining peer addresses the following two questions in their turn:

After the last team member has given their feedback, you move on to the next team member.

An important aspect of the meeting is the protocol. One participant writes a protocol containing the mentioned appreciation and growth potential for each team member. After the meeting, the protocol is formally handed over to them.

The PDF for the protocol can be found in the ‘Getting Started’ section below.

As a follow-up, the protocol can be used as a valuable input for a subsequent 1-on-1 meeting with the team manager. In this meeting, both can reflect on the received feedback and come up with an action plan.

The Briefing and the Feedback Rules

To make this meeting successful, a briefing is essential. Otherwise, you may end up with endless disputes, hurt feelings, insults or broken interpersonal relationships. My briefing looked like this:

In our team, we tried this feedback approach. Our most important findings are:

A Success at Spreadshirt

I presented the Complete Peer Feedback approach to other team managers at Spreadshirt. As of today, it was adopted by many other teams. They were all satisfied with this approach and gave positive feedback to me.

There are many introverts in our software industry, which is great. However, some introverts may have trouble with speaking up and dare to give negative feedback directly into one’s face. In this case, you can consider a variation: Let all team members write down their feedback on sticky notes. Next, all notes are collected and presented by a neutral person. So nobody knows which feedback comes from which person.

Sticky notes may also be a good strategy if the team members fear negative consequences for their career if they give honest feedback to the team manager.

However, we decided against this anonymous approach. We experienced that messages on the sticky notes tend to be unclear on what exactly was meant. The missing context and framing may lead to misunderstandings. Moreover, we also learn less about our team in terms of opinions and relationships.