Especially in bigger teams, establishing and maintaining a common standard for software development is important and challenging. At the same time, it’s crucial to involve the whole team in the creation of the standard to ensure its acceptance and high quality. In this post, I present our approach for this: The regular meeting “Tech Talk” and the team guide. 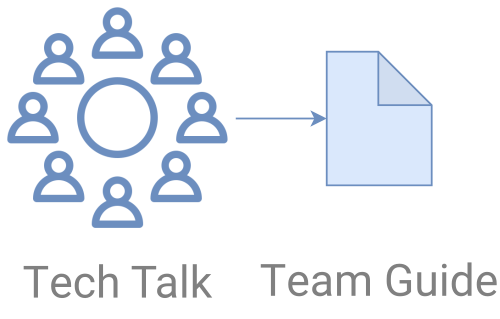 About 1.5 years ago, our current team was founded by merging two existing teams. The challenge was that both teams worked differently. For instance, they preferred different libraries and databases, they followed different coding conventions and packaging structure, they had a different development process and different ways of performing code reviews.

How do we bring those different approaches together? How do we commit to a common way of working?

We felt, that we have to talk about these topics and to commit to rules as a team.

The solution was the following:

The important aspect here is that the team set their guidelines. The decisions in the Tech Talk affect everyone so everyone should be involved in the decision-making. Every team member can have an impact which increases the motivation to participate and the acceptance of the guide. A contrary approach would be an ivory tower where only the senior developers gather together and decide on the way the whole team has to work. That would be very frustrating for the rest of the team and would lead to poor decisions.

In the weekly Tech Talk, we discuss topics like:

Each meeting should end with a concrete decision and a commitment by the team. Moreover, it’s important to concisely write down the agreement. Therefore, it’s important to moderate the meeting and focus on having an applicable outcome and a record. This meeting is not about endless philosophical discussions and dreaming.

The team guide is written during the Tech Talk and concisely points out the agreements. It can be treated as a reference for looking up things later. The guide is not a record of the discussions with all pros and cons but a short documentation of the outcome.

Ideally, the guide is written with the developer’s favorite tools. Devs like Markdown and Git and they like to use their well-known editors. No dev like editing Wiki/Confluence pages in the browser. So that’s our approach:

To render the Markdown files in nice HTML you can go with different approaches:

This way, writing the team guide is fun.

We maintain a Wiki/Confluence page where every team member can drop possible topics for upcoming tech talks.

Voting for a Topic

The decision for the topic of the next talk is made via voting. To make the poll as easy as possible, we use our instant messenger for this. Most modern chat tools have a poll feature built-in. If not, you can go with an emoji voting:

The poll for the tech talk on Wednesday is done on Monday. This gives the colleague that dropped the idea a little bit of time for preparation if required.

Most of the time, the team can find an agreement by exchanging arguments and convincing each other.

But what if there is still no consensus at the end of the discussion? In this case, you have at least two options:

I’m careful with exclusively deciding by majority vote. Majority votes work if - and only if - all participants a) are affected equally by the decision and b) have the same expertise to make a well-founded decision. Often, this is not the case in teams with different levels of expertise and different roles. In the worse case, a majority that is not affected by the decision can outvote a minority which then has to suffer from the decision.

Still, it’s important to gather all opinions during the discussions and to actively ask introverted developers for their opinion if they don’t dare to speak up. This doesn’t mean that the final decision has to be made by a vote.

Alternatively, the tech lead can have the last word when it comes to hotly disputed topis. Often, they are accountable for the technical success of the team. Therefore, they can and sometimes should take the responsibility for the decision.

To wrap up, establishing tech talks and a team guide provides the following advantages: